On the way in the white-blue country

If you not only want to marvel at the breathtaking natural landscapes during your cycling holiday in Bavaria, but also enjoy urban flair, you should definitely start your cycle tour in the Bavarian capital of Munich. Munich is best known for the Oktoberfest, which attracts around 6 million visitors every year. The Bavarian metropolis has much more to offer than the biggest folk festival in the world. On a city tour through Munich, you should definitely pay a visit to the Marienplatz and be enchanted by the carillon in the New Town Hall.

Right next to it is the Viktualienmarkt with its numerous market stalls and a cozy beer garden, where you should definitely take a break to get to know the Bavarian hospitality. Worth seeing are also the Olympic Park with the Olympic Tower and the Nymphenburg Palace with its extensive park. From Munich it is not far to the most beautiful lakes in Upper Bavaria. Here you can expect crystal-clear water, many bathing spots and a breathtaking mountain panorama. The closest to Munich lake is Lake Starnberg. You can reach this either directly from Munich or with a detour via Lake Ammersee, the third largest lake in Bavaria. On the way you will cycle past interesting small villages and small towns.

Between the lakes Riegsee and Staffelsee lies the artists' village Murnau with the Murnauer Moos, the largest bog area in Central Europe, where until today a fascinating biodiversity could be preserved. Not far from Murnau lies Garmisch-Partenkirchen. Take the Zugspitzbahn to the highest peak in Germany and enjoy the unique mountain scenery. Worth seeing is also the spa town of Bad Tölz, which many should be known as the location of the television series "The Bull of Tölz". One of the last in the round of the Munich lakes is Lake Tegernsee. Surrounded by a unique mountain backdrop, this lake has something for everyone.

This cycling tour leads you through the most beautiful regions of Upper Bavaria.

Munich and its lakes, 7-days

This bike tour leads you past numerous lakes in Upper Bavaria.

Munich and its lakes, 8-days

This bike tour starts and end in the bavarian capital and leads you past fantastic lakes. 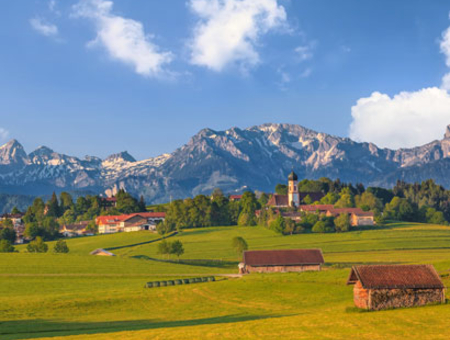 Travelling on the trails of king Ludwig II., this cycling tour will lead you from Munich into probably the loveliest regions in Bavaria.